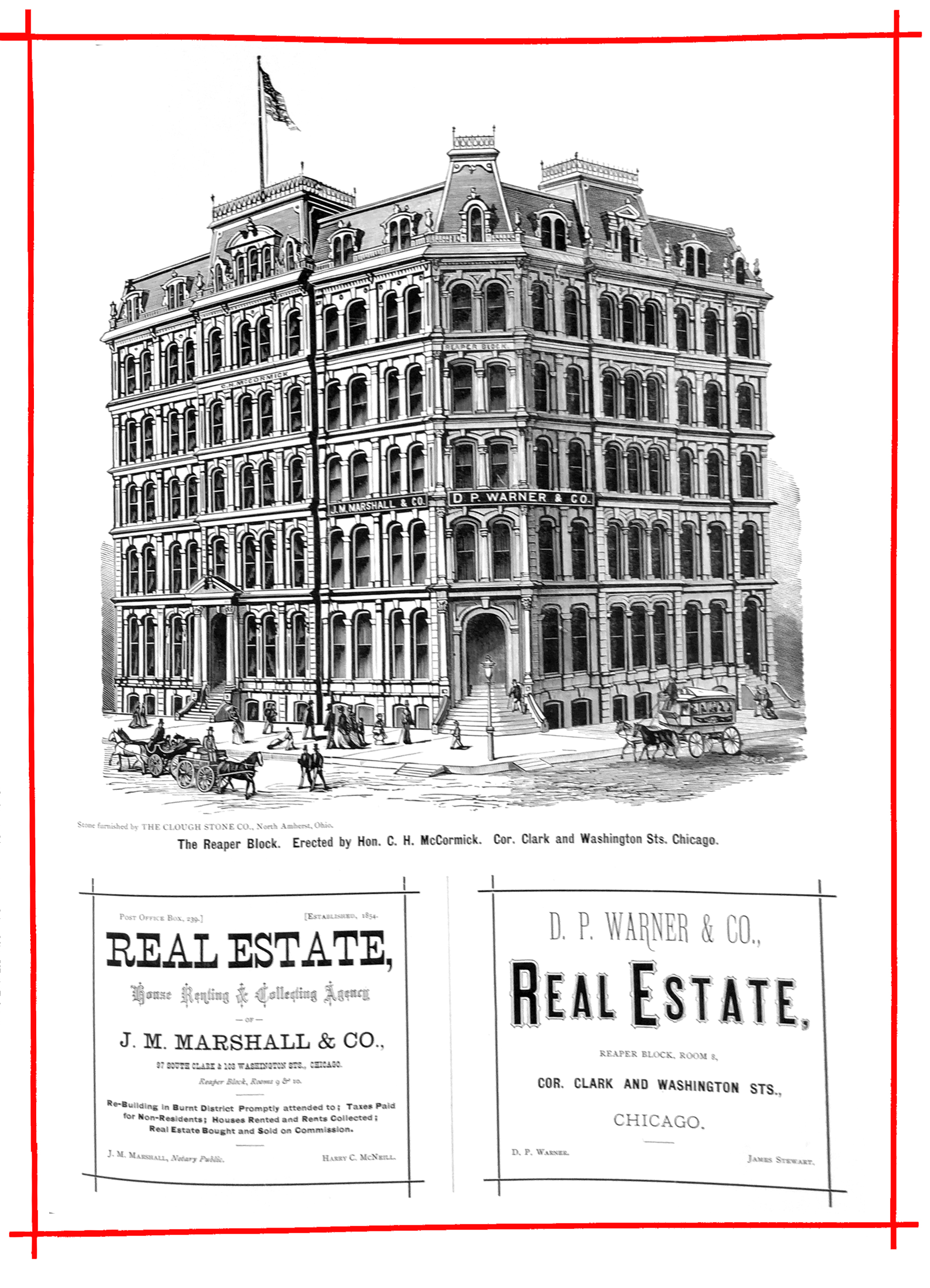 Reaper Block, built by the late Cyrus H. McCormick, immediately after the great fire. It derives its name from the business in which Mr. McCormick was engaged, the manufacture of reapers. One of the handsomest of the old office structures of Chicago.

The Reaper Block is an imposing Parisian pile of the old style, with Mansard and stone front, at the northeast corner of Clark and Washington streets, fronting 90 feet on Clark and 75 feet on Washington, 6 stories high, or 65 feet, with basement, 6 stores, 80 offices, and 1 elevator. It was erected in 1873, and is occupied by a desirable class of tenants, on account of its nearness to the courts.

Modern Structure Is Obtained at Moderate Expense from an Old Building.

The alterations of the Reaper Block at the northeast corner of Clark and Washington streets are now nearing completion. he building has been changed from a five-story building and mansard to an eight-story building, and the Sears building adjoining on Washington street has been included in the changes, forming a single structure. During the week two panes of glass were broken in the Washington street front of the building, and the rumor gained currency that the walls were not strong enough to support the added weight. A careful examination was made of the walls by the Building Department, and they were found to be in excellent condition. The building from the exterior looks as well as many of the more modern structures.

When the estate of Cyrus H. McCormick, owner of the Reaper Block, was considering the advisability last winter of erecting a modern tall building on the site it was determined to make a thorough examination of the structure as it then stood and see if it could not be adapted to present requirements. It was thought this might be possible since the building was designed by J. M. Van Osdell, and was constructed in the most thorough and substantial manner. The examination of the walls and foundations by expert engineers showed them to be sufficiently strong to sustain additional stories. The mansard roof was consequently removed and two additional stories were constructed, extending over the adjoining building on Washington street, which being owned by the estate, was included in the reorganization.

As a result there is now to be seen one of the most dignified and satisfactory buildings on the street, showing little or no evidence of alteration. That the walls and foundations were ample is shown by the fact that there has not been the slightest settlement at any point, and the structure as it now stands will be serviceable for the next fifty years. 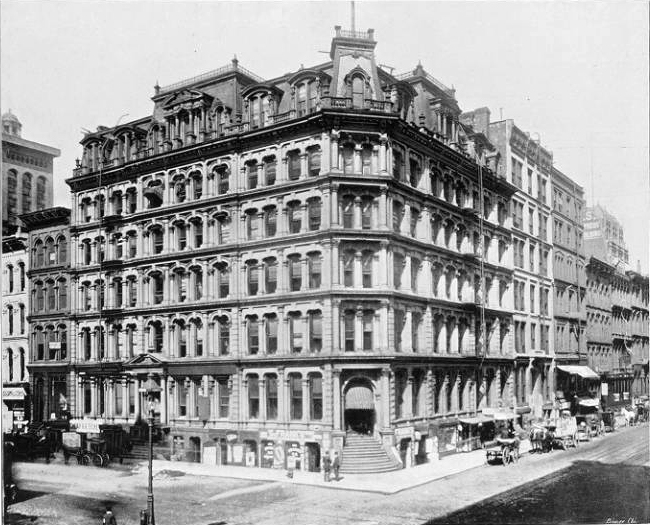 Within, the economy of space is striking. While the corridors and passages are ample, there has been gained in the basement and first story 25 per cent of additional floor space for renting purposes, and the portion formerly given over to an old-fashioned wooden stairway now affords abundant room for two hydraulic elevators and a iron staircase, the shaft being entirely enclosed by masonry walls.

The substantial masonry vaults which were a feature of the old building have been extended up with the new stories, so that proper security is obtained. White oak finish, tinted walls, and hardwood floors give the attractive effect to be found in the most recent of high buildings. A barber-shop and marble toilet room have been added to the top floor. It is the intention to make this as far as possible a law and real estate building. The entire first floor has been leased to the Security Title and Trust company, successors to the abstract firm of Haddock, Vallette and Rickcords company, which will have in the basement a conveniently arranged fireproof vault nearly fifty feet square, being by far the largest vault in the city used for such purposes. Several large law firms have taken offices on the upper floors, among whom are Lackner & Butz, Baldwin Bros., Underwood & Butler, and Hiram Cody & Sons, all of whom have desirable suites of offices. The plans for the remodeling of the building were made and the carrying out of the plans were done by William A. Illsley. The cost of the remodeling of the two buildings was $150,000. 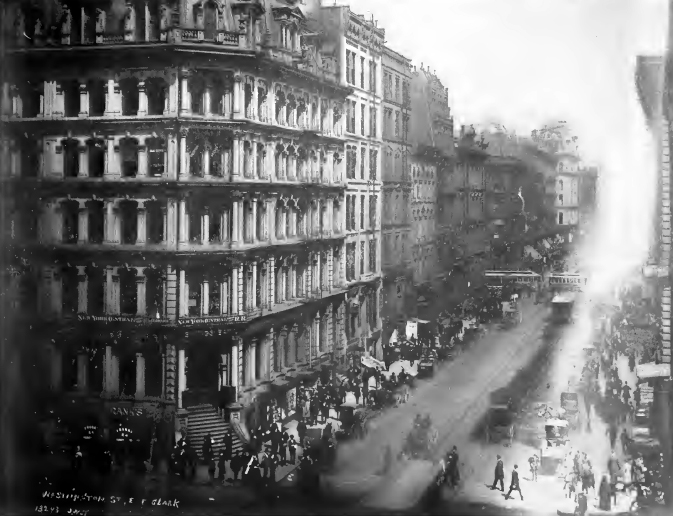 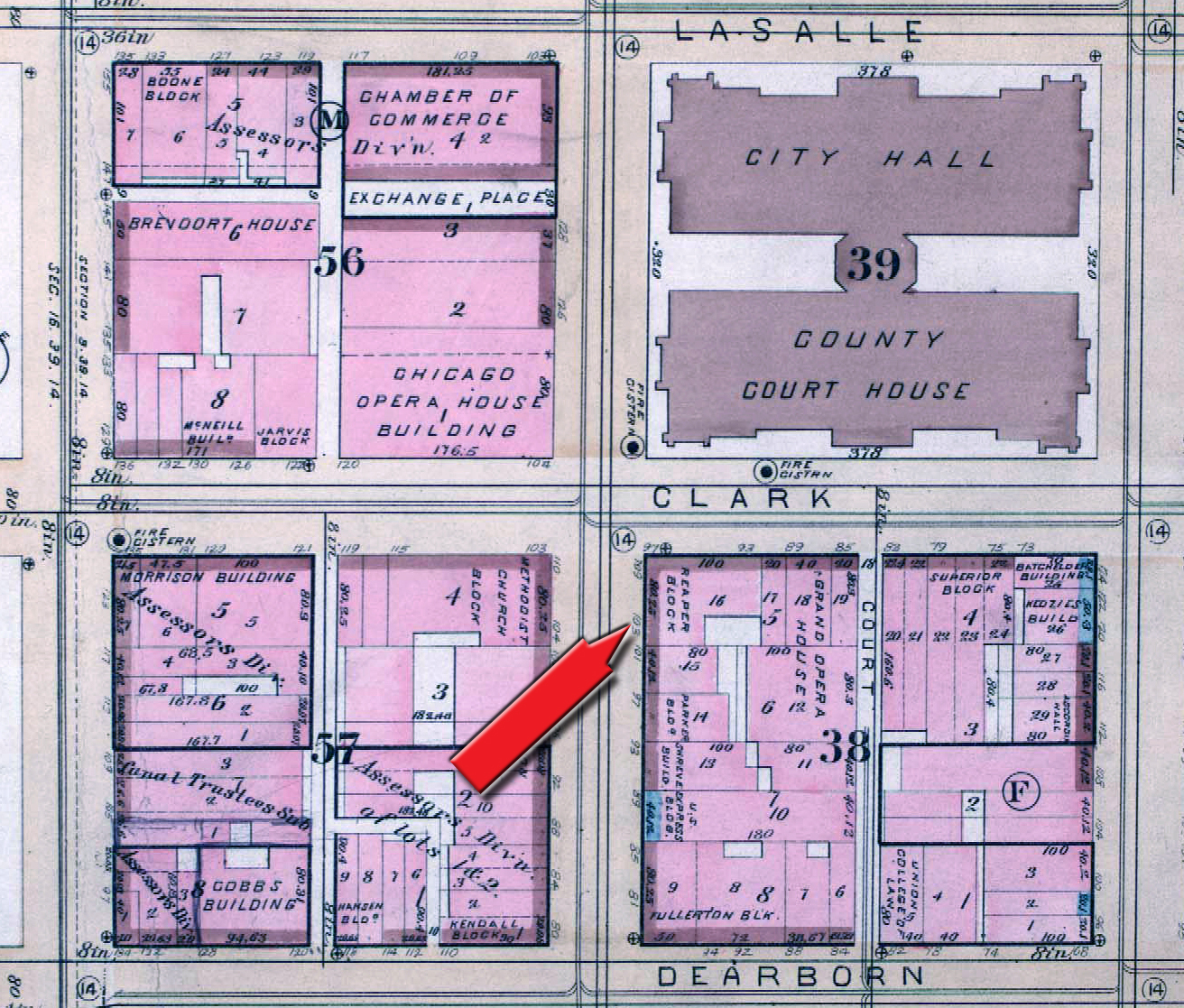